The Nike Dunk has an origin story unlike any of its footwear counterparts and its obscure route to global popularity is one which not even the most inspired business minds could ever script for success.

1985 was a year which delivered a national frenzy around the sport of Basketball within the United States. The average supporter was not only watching NBA games but college basketball was also well attended at local arenas and even televised.

Nike had identified an opportunity to sell basketball shoes and apparel to an entire team based on the colours of the college they played for. Nike also realised that shoes and the matching apparel could be worn by supporters in the arena and those watching at home.

Designed by Peter Moore (the same guy who gave us the Air Jordan 1), the Dunk was first named the “College Colour High”. Even its original name revealed the opportunity Nike was chasing. 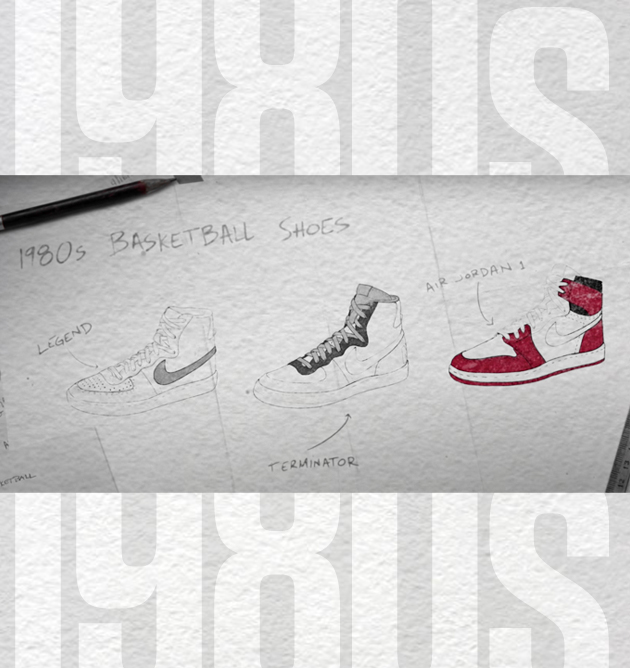 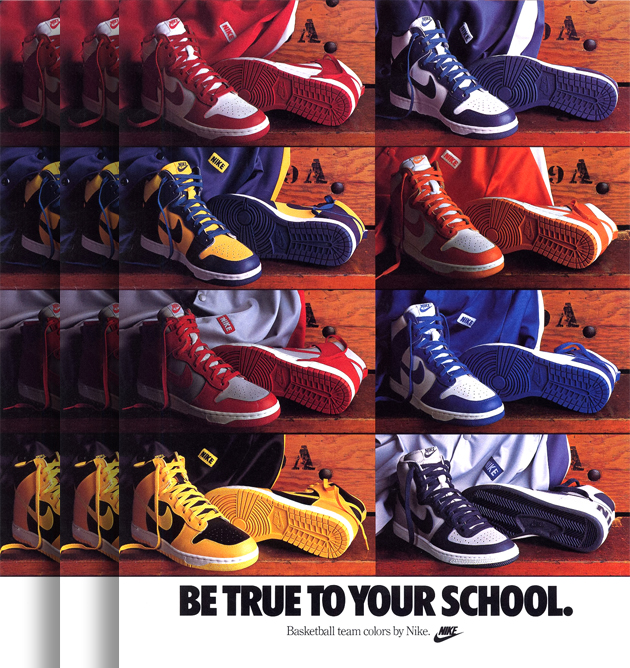 The mantra for Nikes marketing vision to make the Dunk come alive was “BE TRUE TO YOUR SCHOOL”. For those with a keen enough eye, you might have noticed The Nike Terminator amongst the Dunks in the ad.

By 1987 the Dunk was completely eclipsed by the performance and hype of the Air Jordan 1. The Dunk had been overlooked and eventually silenced completely by its bigger and more popular brother.  Retailers had relegated Dunks to the SALE bins where they were found and adopted by American rebellious subcultures all looking for good sneakers at a steal. The Dunk slowly emerged as a common footwear theme within the subcultures of Hip Hop, Punk Rockers and most notably the Skateboarding scene.

Skateboarders loved the Dunk since it owned performance features, they held in high regard.

The thin soles meant the skateboards could be felt underfoot easily while the traction pattern meant a secure grip for propulsion and tricks.  In addition, the high leather construct kept the foot protected…plus it looked good.

When Nike saw the rise in popularity of the Dunk in the skateboarding scene, it quickly tried to create a new product line for an emerging Skateboarding customer. Despite Nike’s best efforts to create a skate shoe designed for its intended user, Skateboarders did not buy into the product of a corporate entity who was trying to become a part of their culture without authentically being a part of it. Nike Skateboarding endeavours remained ineffective for more than a decade.

By the late 90s Dunks were still part of the Nike offering but no longer a chunk of its premium selection. This was largely possible because Nike had stopped producing the Air Jordan 1 while continuing with the rest of the Air Jordan franchise. 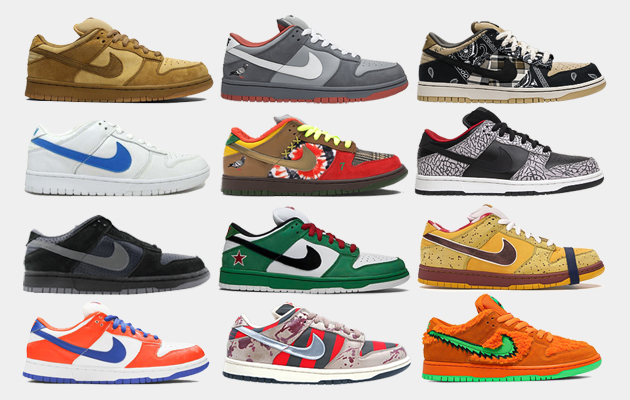 In a bizarre twist of fate, Footaction (a US based retailer) requested that Nike make the Dunk in a patent leather application.

The Nike employee who managed Dunks for the region not only approved the idea, but created Dunks in unreleased colours along with modifications that included a thicker tongue. Admittedly, Nike did go off script with its own Dunk plan but created a new variant of the Dunk named The Dunk Pro B which ignited new interest in the shoe.

In 2001 Nike took another stab at the skateboarding market, but this time made a concerted effort to first understand skateboarding culture before launching a product line. Led by Sandy Bodecker, Nike approached independent skate stores in order to ascertain as much information as it could regarding skate culture and lifestyle. Through numerous conversations, it was revealed that instead of trying to attain the holy grail of skate sneakers, it would be much better for Nike to simply make the Dunk into a skate shoe. 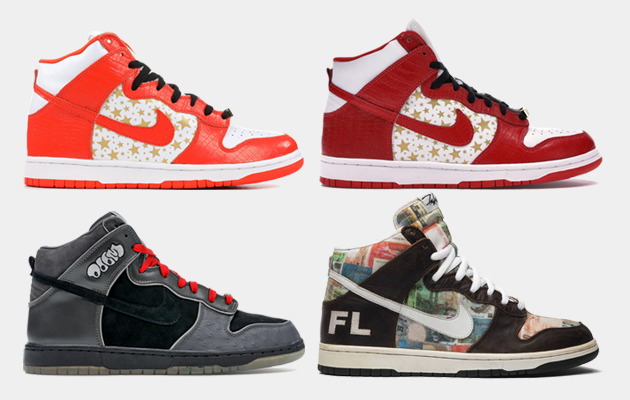 The new brand, “Nike SB” (for Skate Boarding), first released a pack of 4 shoes called the “Colours By” series. The Nike Dunk was the lead product and featured custom colour choices by Skating athletes: Reece Forbes, Gino Lannucci, Richard Mulder and Danny Supa. This Dunk was enhanced by a snugger fit, a thicker tongue and a Nike Zoom Air cushion in the sock liner.

Nike’s Skateboarding success due was to an in-house independent team who worked and thought skate only. The team sold only to skate stores who were 100% authentic skate locations. After the Dunk made a name for Nike in the Skateboarding community, the company focused on rare collaborations of the Nike Dunk SB and delivered the world’s most desired Dunks ever.

Because of the Nike SB Dunk, the regular Dunk variation has also earned a more prominent seat at Nike’s product table and has thus has been given an ICON status by the brand.

Today the Dunk is regarded as a core sport style alternative to those who find the Air Force One too chunky.

Its sleek on-foot-appeal has garnered the attention of its originally intended audience and picked up some unlikely fans along the way.…. thus, the Dunk has transcended its original basketball heritage and found a new home in the hearts of many who would not even think “basketball” while lacing up a fresh pair.